On Friday, October 23, I had the privilege of hosting Writing in Detroit: A Virtual Reading featuring Christiana Castillo, Scheherazade Washington Parrish, and Devin Samuels. All three artists shared stunning work and responded to the question, “How has Detroit influenced your writing?”

Not only did I find myself blown away by the writing shared by our guests, but their responses to what I thought was a simple question opened a door for complex perspectives on the city that each expressed a deep love for.

Samuels, a Providence, Rhode Island native who recently moved to Detroit, spoke about his gratitude for the city’s writing community and his ongoing exploration of literary resources and the various historic narratives reflected in the work of local writers. “I can’t sing the praises of Detroit’s writing community enough,” said Samuels. “Being in a place like that will change you.”

Washington Parrish expressed how “Detroit is home, and so Detroit influences my writing the way home influences everything.” I identified deeply with this response as someone who has also reflected on how the city influences my work. At times we talk about how Detroit is different from other cities or mysterious. This answer identified Detroit clearly and simply as another home. Washington Parrish continued by saying what we all feel about our respective hometowns: “You have to have a particular sight to see and appreciate what is happening here.”

Castillo closed out our discussion by speaking about her family, who have spent four generations in Detroit. “To me that’s just a lot of ancestral knowledge I can tap into,” said Castillo. She also praised the writing community and how special it feels to be a writer in Detroit. “There’s never been a moment I haven’t felt held and supported in Detroit’s community,” said Castillo. “I can’t imagine writing anywhere else.”

I was struck by all of the thoughtful answers our guests brought to the table. You can watch the reading and discussion on Poets & Writers’ Facebook page now! 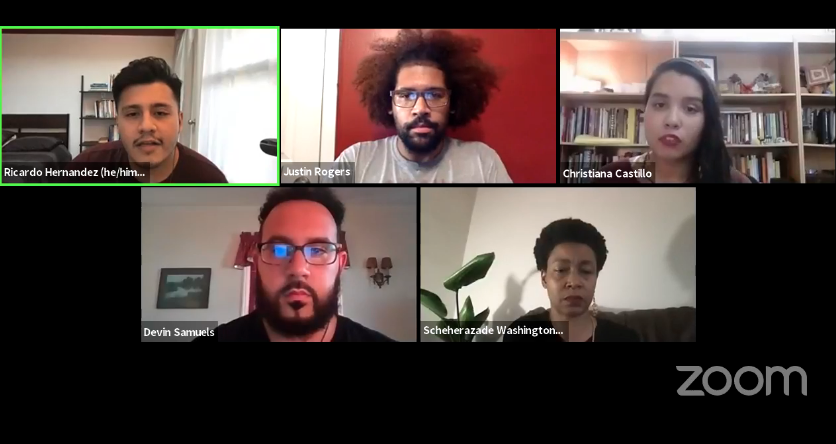 Justin Rogers is the literary outreach coordinator for Poets & Writers in Detroit. Contact him at Detroit@pw.org or on Twitter, @Detroitpworg.
LOC:
Detroit