With so many good books being published every month, some literary titles worth exploring can get lost in the stacks. Page One offers the first lines of a dozen recently released books, including Just Us: An American Conversation by Claudia Rankine and Transcendent Kingdom by Yaa Gyasi.

“What does it mean to want / an age-old call / for change / not to change // and yet, also, / to feel bullied / by the call to change?” Just Us: An American Conversation (Graywolf Press, September 2020) by Claudia Rankine. Sixth book, third nonfiction book. Agent: Frances Coady. Editor: Jeff Shotts. Publicist: Elizabeth Shreve.

“If you want to know what we are whose body parts are scattered to the winds, dispersed as heirloom seeds into the beaks, stomachs, and droppings of migratory birds, broken through our clear film of rage to leaf and fruit, no matter what the territory or terrain…” Letters to a Young Brown Girl (BOA Editions, September 2020) by Barbara Jane Reyes. Sixth book, poetry collection. Agent: None. Editor: Peter Conners. Publicist: Ron Martin-Dent.

“According to Korean tradition, after a baby is born, mother and baby do not leave the house for the first twenty-one days.” Inferno: A Memoir of Motherhood and Madness (Henry Holt, August 2020) by Catherine Cho. First book, memoir. Agent: Amelia Atlas. Editor: Caroline Zancan. Publicist: Carolyn O’Keefe.

“Whenever I think of my mother, I picture a queen-sized bed with her lying in it, a practiced stillness filling the room.” Transcendent Kingdom (Knopf, September 2020) by Yaa Gyasi. Second book, novel. Agent: Eric Simonoff. Editor: Jordan Pavlin. Publicist: Josefine Kals.

“éclat of eighth notes   |   your otherwise   |   known // as heft in gauge   you’re | ear-minded,   a felon of | time- // divided current—deft   | measures (twice), cut   | the clothes off bob johnson once.” under the aegis of a winged mind (Autumn House Press, September 2020) by makalani bandele. Second book, poetry collection. Agent: None. Editor: Christine Stroud. Publicist: None.

“In the inky, dismal, and unprofitable research of a recent leave of absence from my life, I happened upon a historical prism of Assurbanipal that I found somewhat disquieting.” Underworld Lit (Wave Books, August 2020) by Srikanth Reddy. Fourth book, poetry book. Agent: None. Editor: Matthew Zapruder. Publicist: Catherine Bresner.

“It was on a bright, perfectly windless April day exactly seven years ago that I discovered, on a globe in the map department of the National Library, an island by the name of Ganges that I had never heard of.” An Inventory of Losses (New Directions Publishing, August 2020) by Judith Schalansky, translated from the German by Jackie Smith. Fifth book, story collection. Agent: None. Editor: Tynan Kogane. Publicist: Brittany Dennison.

“I grew up with pickles.” You Don’t Have to Go to Mars for Love (Four Way Books, September 2020) by Yona Harvey. Second book, poetry collection. Agent: None. Editor: Sally Ball. Publicist: Clarissa Long.

Barbara Jane Reyes reads from her poetry collection Letters to a Young Brown Girl, published in September 2020 by BOA Editions.

Catherine Cho reads from her memoir, Inferno: A Memoir of Motherhood and Madness, published in August 2020 by Henry Holt.

Yaa Gyasi reads from her novel Transcendent Kingdom, published in September 2020 by Knopf.

Raven Leilani reads from her novel, Luster, published in August 2020 by Farrar, Straus and Giroux.

makalani bandele reads “earl of harlem meets the high priest of bebop” and the “leit[blue]motif” from his poetry collection under the aegis of a winged mind, published in by September 2020 by Autumn House Press.

Yona Harvey reads “Segregation Continuum,” “Snowbound / A Resistance,” and “The Subject of Retreat” from her poetry collection You Don’t Have to Go to Mars for Love, published in September 2020 by Four Way Books. 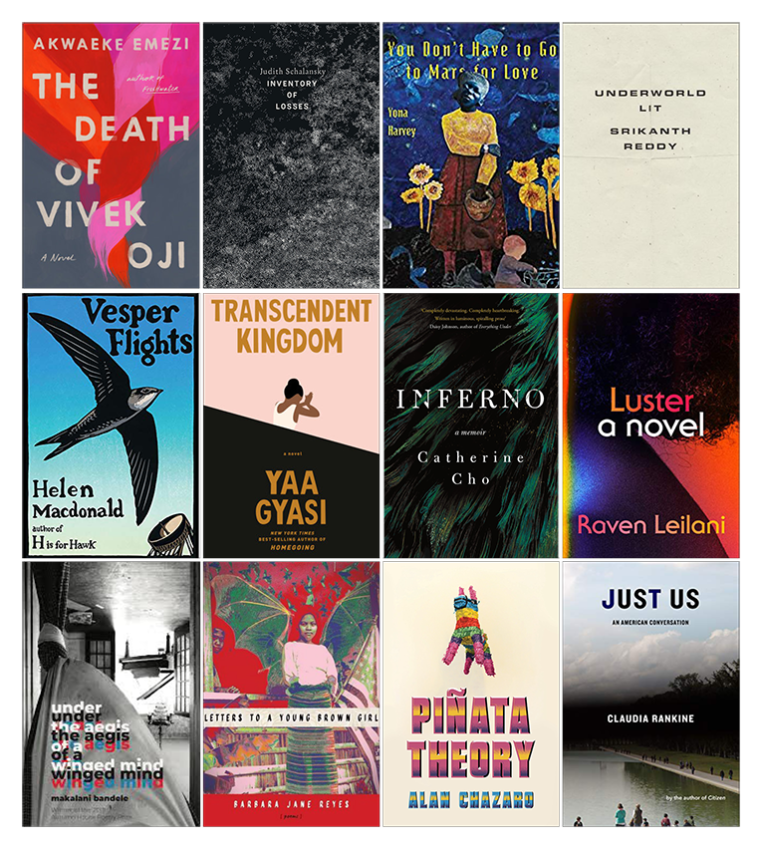