With so many good books being published every month, some literary titles worth exploring can get lost in the stacks. Page One offers the first lines of a dozen recently released books including The Tradition by Jericho Brown and Orange World by Karen Russell.

“It’s been twenty-five years since I last murdered someone, or has it been twenty-six?” Diary of a Murderer (Mariner Books, April 2019) by Young-Ha Kim, translated from the Korean by Krys Lee. Twelfth book, fifth story collection. Agent: Kent Wolf. Editor: Pilar Garcia-Brown. Publicist: Emma Gordon.

“you are the red dot / on the glass over the map” Documents (BOA Editions, April 2019) by Jan-Henry Gray. First book, poetry collection. Agent: None. Editor: Peter Conners. Publicist: Ron Martin-Dent.

“When I think back to my early childhood home in Minneapolis, my brain conjures up a dim outline of a blue house on Pillsbury Avenue.” All That You Leave Behind (Ballantine Books, April 2019) by Erin Lee Carr. First book, memoir. Agent: Meg Thompson. Editor: Pamela Cannon. Publicist: Jennifer Garza.

“My daddy’s side of the family has blood made of craw daddies / bayou waters / red bones / big waves of silk” When You Learn the Alphabet (University of Iowa Press, April 2019) by Kendra Allen. First book, essay collection. Agent: None. Editor: James McCoy. Publicist: Allison Means.

“My name is August Epp—irrelevant for all purposes, other than that I’ve been appointed the minute-taker for the women’s meetings because the women are illiterate and unable to do it themselves.” Women Talking (Bloomsbury, April 2019) by Miriam Toews. Eighth book, seventh novel. Agent: Sarah Chalfant. Editor: Liese Mayer. Publicist: Tara Kennedy.

“In this house, everything is said.” What I Knew (Nightboat Books, May 2019) by Eleni Sikelianos. Eleventh book, ninth poetry collection. Agent: None. Editor: Stephen Motika. Publicist: Andrea Abi-Karam.

Jericho Brown reads a poem from his new collection, The Tradition, published this month by Copper Canyon Press.

Karen Russell reads an excerpt from her new story collection, Orange World, published by Knopf in May. 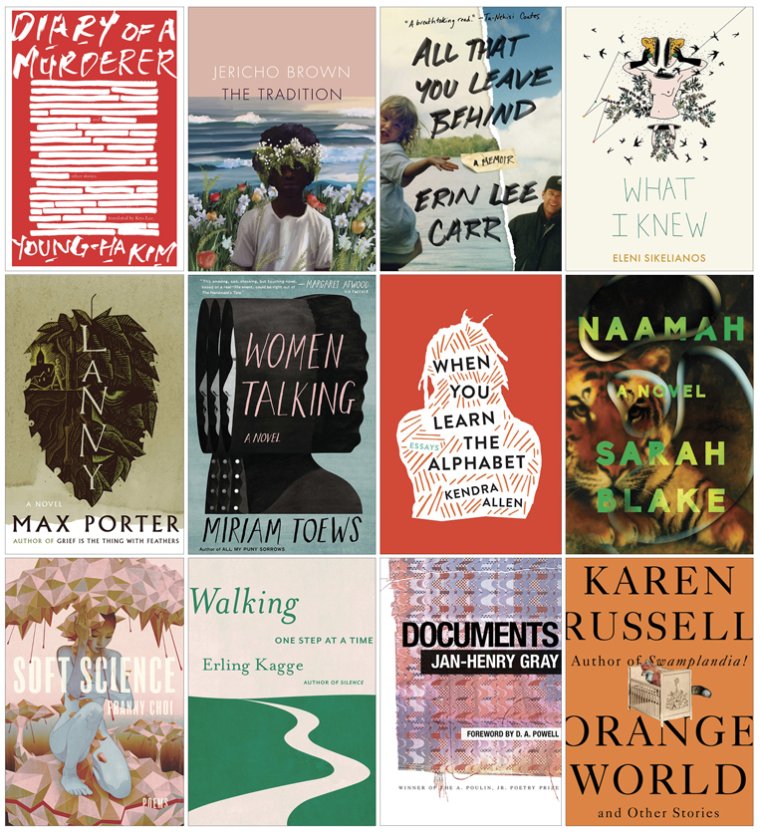