“I want you to show them the difference between what they think you are and what you can be.”
—Ernest J. Gaines, A Lesson Before Dying

I met Ernest J. Gaines, who died on November 5 at the age of eighty-six, at the Louisiana Book Festival a couple of years ago. After a talk he gave from his wheelchair, I introduced myself and told him I was trying to be a writer. “Keep trying and reading,” he replied. It was said with the kindness and warning of an elder that knew trying (i.e. many bad drafts and rejections) is a precursor to being a writer.

Gaines represented a pride in the South and the African American experience of his rural Louisiana childhood through his writing. Born in Oscar, Louisiana, the son of sharecroppers, Gaines graduated from San Francisco State University and attended graduate school at Stanford University. He was the author of eight novels, including The Autobiography of Miss Jane Pittman (Dial Press, 1971), A Gathering of Old Men (Knopf, 1983), and A Lesson Before Dying (Knopf, 1993), which received the National Book Critics Circle Award for Fiction in 1993. In addition, Gaines was the recipient of a Guggenheim fellowship and a MacArthur “Genius” grant.

If you’re ever in Louisiana and have some time on your hands, stop by the Ernest J. Gaines Center at the University of Louisiana at Lafayette. Gaines donated his early papers and manuscripts through 1983 there, and it is expected that the center will acquire the remainder of his papers. 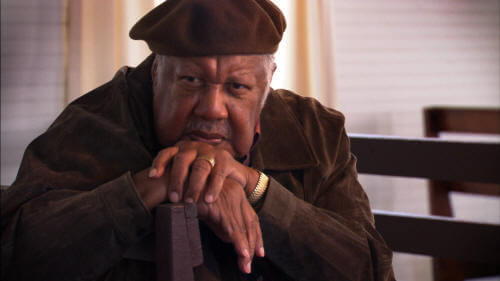